Herbert Mensah Calls on Ghana to “Embrace” May 9th

Mr Herbert Mensah, Chairman of Kumasi Asante Kotoko at the time of the second biggest recorded stadium disaster on 9 May 2001 at the Accra Sports Stadium, has called on all Ghanaians to “Embrace The Day” not only in solidarity with the 126 fallen heroes who died on that day but in a call for responsibility, discipline and respect in all matters related to sports.

The Accra Sports Stadium disaster occurred at the then Ohene Djan Stadium, Accra, Ghana on May 9, 2001. It took the lives of 127 people, making it the worst stadium disaster to have ever taken place in Africa.

May 9th 2001 occurred during a match between Ghana’s two most successful football teams, Accra Hearts of Oak Sporting Club and Kumasi Asante Kotoko. Trouble had been anticipated, and extra security measures had been taken. The home side scored two late goals to defeat Kotoko 2–1 which led to disappointed Kotoko fans throwing plastic seats and bottles onto the pitch.

The response to this crowd disturbance from the police was to fire tear gas into the crowd. Panic ensued and a resulting stampede led to the deaths from compressive asphyxia of 127 people.

Since that tragic day in 2001 a group of philanthropists under leadership of Herbert Mensah, supported by various individuals and companies in Ghana, religiously remembered the day with a series of events.

According to Mensah the message of May 9th is both a call for responsibility and a call to make the most of every day that God has given you.

The 2017 theme of “Embrace the Day” was conceived from the stark reality of that dark and tragic day on 9 May 2001 when 126 young football fans did not plan to die that day.

“We can’t predict the future and do not know what tomorrow holds for us. May 9th Remembered is a call for responsibility to all, but it is also a call to embrace every day and use the talents God has given us to create a better future for the generations that will follow us,” Mensah said. 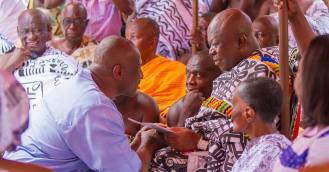 In one of the highlights of the 2017 May 9th Remembered activities Mensah and a section of the families of the victims of May 9th were invited to the Manhyia Palace by the Asantehene, Otumfuo Osei Tutu II, as part of his birthday celebrations.

In his remarks at the Manhyia palace, Mensah lauded the Asantehene for his key roles in the transformation of sports in the country.

Mensah commended Otumfuo for his wise counsel to him (Herbert) on the day that the May 9 stadium disaster occurred in 2001.

“I remember that day, Otumfuo was the first person that I called and he told me to be courageous”, the ex-Kotoko chairman told the gathering. 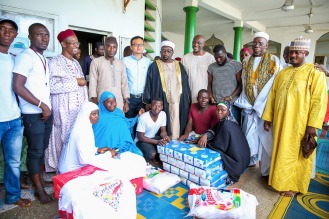 The 2017 May 9th Remembered events also included a visit to the Central Mosque in Kumasi where The Ashanti Regional Chief Imam, Sheikh Abdul Mumin Haruun, lead prayers that also asked Allah to bless and protect Mensah and all those who selflessly and regularly, without fail, remember and celebrate that tragic day 16 years ago.

During the visit to the Central Mosque, Mensah and his delegation also contributed foodstuff to be used for the needy.

The main activity of the annual May 9th Remembered events has always been a street walk through the main streets of Kumasi that was joined by thousands of supporters of the cause. 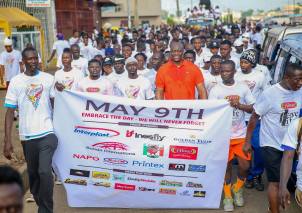 The 2017 Kumasi Street Walked again saw excitement when thousands joined Mensah and his delegation to “Embrace the Day”.

In an address to the media Mensah said that the annual May 9th events will always be part of his agenda and that it would not have been possible without the support of other philanthropists and especially corporate bodies in Ghana who never fail to extend a helping hand.

“I will neglect my duty if I do not mention and thank the likes of Interplast, Inesfly, Golden Tulip, Sunda International, the Gina and Pomo brands, Melcom and many others who have this important remembrance possible year after year,” Mensah said. 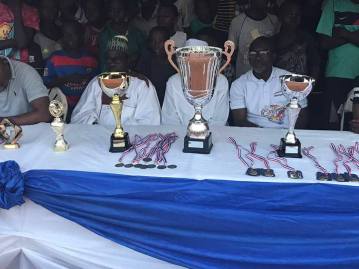 Mensah also introduced an annual football competition dubbed the “May 9th Cup” in 2016 and the final match, that was enjoyed by thousands, took place in Kumasi on Saturday 6 May 2017.

The 2017 May 9th Remembered programme will be continued on May 9th in Accra with the presentation of foodstuff in Accra to families of the deceased from both Accra and Kumasi.

More images can be accessed here: