Mr Herbert Mensah, President of the Ghana Rugby Football Union (GRFU), joined the Board of the Ghana Olympic Committee (GOC) when he was elected as one of five representatives for Olympic Sports.

Rugby Union was only readmitted as Olympics Sport after an absence of 93 years.

Shortly after the 1924 games, the International Olympic Committee (IOC) dropped rugby union as an Olympic sport. Since then there have been numerous attempts to bring the sport back to the Olympic programme. In October 2009 the IOC voted at its session in Copenhagen to include the sevens version of the sport in the 2016 Summer Olympics in Rio de Janeiro. 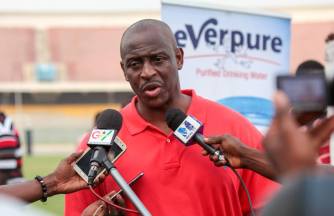 Mr Herbert Mensah, President of the Ghana Rugby Football Union (GRFU), joined the Board of the Ghana Olympic Committee (GOC) when he was elected as one of five representatives for Olympic sports.

Mr Mensah said that the readmittance of Rugby to the Olympics fold was a momentous moment in the history of Rugby.

“It is every athlete’s dream to become a gold medal Olympics holder, and the readmittance of Rugby to the Olympics Games has indeed brought that dream within the grasp of Ghana’s enthusiastic Rugby players – men, women, boys and girls,” he said.

Kenya was chosen from the Africa Region after they qualified at the African Olympic Qualifier in Johannesburg in November 2015.

“There is no reason why Ghana can’t reach the fantastic heights that Kenya has achieved on the world stage of Rugby. We have the athletes and the will and all that is required is the support from our government, governing bodies including the IOC and corporate sponsors to allow the Ghana Eagles, the national Rugby team of Ghana, to soar to both the Olympics and the various World Rugby cups,” Mensah said.

The GOC Congress took place after a tumultuous period in Ghana’s National governing body history that included the blocking of the Congress from taking place in 2016 through a court interdict.

The Ghana Rugby national team, the Ghana Eagles, managed to win the bronze cup in the May 2016 Africa Cup Sevens Tournament that was held in Togo.

Ghana Rugby is currently preparing to host the Rugby Africa Regional Challenge tournament between Benin, Ghana and Togo that is scheduled to take place at the Accra Sports Stadium between 28 and 6 May 2017. Should Ghana emerge as winner of Division 2 of the Africa Rugby tournaments it will be promoted to the Africa Bronze Cup that will put it on the road towards a shot at a Rugby World Cup.

Discussions are also underway with Africa Rugby for admission of Ghana to the Algiers Africa Youth Games in July 2018 that will open the doors for Ghana Rugby to take a youth team to the 2018 Youth Olympic Games in Buenos Aires.

According to Mensah there is a very strong bond that binds Rugby and the Olympics Movement together in the form of the values both share.

“Rugby’s values of integrity, passion, teamwork, discipline and respect is synonymous with the Olympics values of excellence, friendship and respect. I am on record to say that Rugby goes well beyond boys and girls having fun with an oval ball. It is about building character based on the values of Rugby and indeed on the Olympics’ values,” Mensah explained.