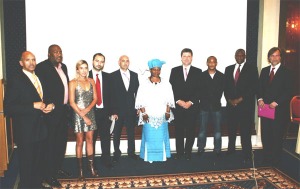 Herbert Mensah says African soccer stars are held in so much regard.

Now it is crucial that enough investment goes into tapping the talent.

Mensah who is the managing consultant of Prosport Ghana noted that African soccer has to do away with the era of slavery and embrace modern player development and management in sync with what pertains in Europe.

Mensah was speaking at the launch of player management agency, Prosport International in Greece.

During the CAN 2008 in Ghana a staggering 35 players left the English premiership to feature for their countries, a vast increase from eight who featured in Mali 2002.

“In West Africa clubs are unable to balance their budgets, players are still sold for a pittance or go to Europe psychologically unprepared and there is little or no investment in youth football. We have to change the status quo,” added.

The establishment of Prosport Greece, he stated will go far to enhance the networking concept he proposes.

Mensah said: “Prosport has a solid reputation of putting customers, be they clubs or players, first and the launch of the Greece office will ensure that that standard is entrenched in Greece and other neighbouring states.